Well we did it. We travelled all the way to Denver, Colorado USA to the World Balloon Convention.

What a fantastic time. We met up with the rest of Team GB and began a 27 hour marathon to create the sculpture we had been designing and planning for over 6 months.

We allocated tasks to everyone, from double stuffing to inflating and building frames. 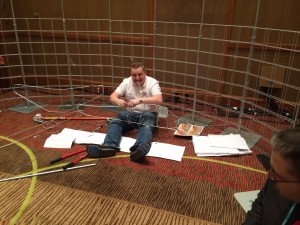 As the day went on the balloons were inflated and the wall started to come together.

We had a team working on the wall with Matt Lewis CBA leading the build of it, a Team inflating the clouds and another team building the planes.

At about 11pm, well into the build I heard a scream from Sara.  The next thing we knew her hand was swelling like crazy.  We tried putting it in ice and getting the hotel first aid to have a look at it.  They recommended going to the ER but Sara was determined to carry on.  Not for long!  In the end I had to play the husband card and tell her point blank it was getting worse and she had to go to the hospital.  Julie Conner from Pioneer took Sara to the hospital.  The Sheraton Hotel provided transport both directions complimentary.  So an Xray, medication and an hour later Sara comes back to the competition room with a damaged tendon, a nice bracelet and a $600 bill.  The meds were so strong she had to go and sleep it off for a couple of hours but then she was back with us (what a trooper).

The sculpture was finally coming together.  Matt had taken control of the clouds. and they were slotted in to place.

I think the lack of sleep caught up with Matt though.

All that was left was to finish the planes and put them into place.  We could not have finished the planes without the help of Beth Barlow from Australia.

Everything came together even with Sara’s damaged hand broken by balloons!

We were so happy with the final design, Sara and I just burst into tears.  This was our baby, we had dreamed this sculpture, designed it, changed the design several times, worried that we would not be able to hold our own on a world stage and then led a fantastic team to create an amazing sculpture that we are so proud of.

We could not have done it without this amazing Team GB.  Thank you.

Sara and I also entered the Balloon Column competition.  Due to Sara being injured WBC allowed us to have Mari Forret come and help do the hand work for Sara, while she had to just sit, watch and direct – she loves giving out orders so she was quite happy (not so sure Mari enjoyed this aspect though!)

The column came out great and we had some loverly comments about the use of colour and the texture.

So we spent  over 30 hours building a sculpture and a column (27 hours for the sculpture, a two hour break and then a 3 hour build for the column) and then we had to wait until the Saturday final night party to find out how we had done.

The following day the public got to come and see the sculptures for themselves at the Festival of Balloons.

So what do you do with a sculpture made of almost 30000 balloons when an event is over?

More about the rest of the World Balloon Convention in our next blog.

One Million Bubbles of Hope